Psychic Guardian Super Splendor is a lewd RPG about Nagisa’s escape from a top-secret facility; abducted and cybernetically enhanced, she must fight her way through wave after wave of rapey soldiers using her newfound psychic powers.

I received a free copy of this game for review purposes — thanks Kagura Games! For the purposes of this review, I will only be discussing the patched game. Kagura Games, I wish you’d provide more than twenty-four hours of “early access”. Do you know how stressful it is for me to play and beat your games and write and illustrate these articles overnight?

Wander between floors and fight your way through everybody that stands in your way (and get raped too!) Enemies are randomly encountered and sometimes visible. Combat is turn-based and otherwise unremarkable. There’s basic attacks and “psynergy” (or “PE”); the latter is functionally analogous to “magic” spells in other RPGs. Psynergy is an essential resource to break free from “traps”. Throughout the explorable world are two kinds of traps; “bondage traps” will initiate combat in a “restrained state”; and “violation traps” will play a sex-scene that may result in permanent effects. Restraining traps must be broken by “struggling” or spending PE. As long as Nagisa (the main protagonist) is restrained, she is unable to move (allowing enemies to freely attack and rape her!) As tempting as it may be skip traps, they often blockade chests. It’s a really bad idea to skip any chests, as they often hold useful items and permanent enhancements to your stats. It’s also a really bad idea to allow Nagisa to orgasm, as it’ll drain a chunk of PE and health points. When she orgasms, “afterglow” will prevent her from acting (potentially entering a deadly loop!) As traps increase in durability, it becomes imperative to spend PE to deal increased damage. Essential PE skills are tied to your level — you better be ready to grind!

I found the “trap” mechanic to be stupid annoying. Traps serve as a vehicle to deliver sexual content (which is good), but they suffer from a wide range of issues; if set to “hidden”, you will no doubt run into them every few minutes; considering the time it takes to break free, they hog time that could otherwise be spent progressing; and if you die from a trap, you’ll be forced to restart from the starting area. This isn’t so bad once you’ve progressed far enough to skip floors (via the “elevator” mechanic), but until then it’s a big punishment. I strongly recommend enabling trap visibility from the get-go (following the beginning tutorial). If you want to open every chest and explore every nook and cranny, there are tons of unavoidable traps. Combined with the avoidable traps, I think it’s too much — I got my fill from the ones I couldn’t skip. To break free from traps, you may either use psynergy or alternate between “struggle” and “endure”. The latter options deal minimal damage to traps (so little, by the end of the game it’d take as many as forty-five turns to escape using these methods!) As Nagisa is forced to orgasm, her “sensitivity” will increase, increasing the effectiveness of traps and the likelihood of being stun-locked. Traps are novel the first few times you see them, but after that I avoided them like uh, used fapkins . . . ? E-e-ew.

Wow — I mean, just wow! The sex-scenes are incredible! I wish there were was less recycled content, but the artwork and dialogue were spot-on. Sexual content is unlocked by losing battles or triggering “traps”. Each sex-scene offers a single, static CG with lots of variations for progression and climaxes. I’m pretty sure none of the twenty-one sex-scenes offer consensual sex; each scene has Nagisa humiliated and raped, forced to cum until losing consciousness. At no point in the game does Nagisa learn to love the humiliation. There’s no “corruption” or “lust’ mechanic (like in other titles from the Kagura Games library). Whenever you trigger a “trap”, you’ll enter the standard turn-based combat screen. For each turn you fail to destroy the trap, Nagisa will be raped by her foes (or in some cases, the trap itself!) There are eleven traps to see (though most of them share the same foes and visuals). What sucks is how you’re punished for engaging in sexual content. If Nagisa encounters too many sex-scenes, her increased “sensitivity” will make escaping traps difficult to nearly impossible. You’ll lose turns to “afterglow”, ultimately leading to a slow and painful death through multiple orgasms (yes, sex kills you). This mechanic became so problematic, I started saving before touching any enemies or traps. All it takes is a little bad luck to be stun-locked (or rather, stun-raped) to death (in which case it was better to close the application and try the battle again).

Twenty years have passed since Nagisa Kujo was abducted. Born a powerful psychic, she became the Shalldark organization’s prized “Sample 044”, codename “Black Splender”. She and Mitsuki Kazamatsuri, codename “White Order” (or “Sample 049”) are the most powerful psychics ever conceived. Between White Order and Black Splender, Shalldark has the power to take over the country! Neither Mitsuki or Nagisa are keen to fulfilling their missions — so their personalities were removed, replaced by what Shalldark calls “Artificial Personalities”. Black Splender was a monumental success, but the same couldn’t be said for her equal. In a fit of rebellion, White Order killed Shalldark’s previous boss. If it wasn’t for Black Splendor’s intervention, she would have surely destroyed Shalldark then and there. The two psychics were placed into a cryogenic stasis. Years later, Nagisa is awakened by Mitsuki’s voice — she has adopted an “existence of pure thought”, speaking directly to Nagisa (apparently deactivating her artificial personality). It’s not too late for Nagisa to get away! Mitsuki’s only desire is to see to her old friend’s safe escape. However, Nagisa isn’t going to leave without her friend (in one piece) . . . and Shalldark isn’t interested any letting any of them leave! As Nagisa fights her way through twenty heavily-fortified floors, she’ll have to face-off the “Elite Five”, Shalldark’s most battle-hardened psychics. Mitsuki’s body rests in the deepest reaches of Shalldark HQ — but it’s not her body anymore. To save Mitsuki, Nagisa will have to hone her psychic prowess to defeat her equal. Nagisa and White Order’s goals are not dissimilar; by restoring Nagisa’s memories, she hopes to regain her partner in crime from years ago, to “return Black Splender to her rightful place.” She too wishes to escape Shalldark — but there’s only enough room for two to go.

This paragraph contains some spoilers — skip ahead if you want to experience the game wholly unspoiled. If I had to summarize all of my complaints for the story in one word, I’d say “missed opportunities” — shit, that’s two words — fuck it. Nagisa want to leave Shalldark with her companion, and so does White Order. Nagisa has control of Black Splendor’s body, and White Order Mitsuki’s. However, Black Splendor’s character only exists in scant “data records”. At no point does she make a surprise appearance, or attempt to take back her body from Nagisa. Mitsuki shares a rivalry with White Order (which unfortunately, wasn’t explored as much as it should of) — why shouldn’t Black Splendor try to fight Nagisa? I was expecting Black Splendor to have some sort of a “change of heart” towards the end of the game, but I surprised to see her character totally unused. Here’s an idea: what if Nagisa was forced to surrender her body to Black Splendor, allowing her to say, fight White Order? It is repeatedly stated that Black Splendor refuses to kill, which would have (A) preserved White Order’s body and (B) given Nagisa (or the player) a chance to finish the fight. It is established that White Order didn’t escape before due to Black Splendor’s intervention, but it’s never explicitly said that she did so out of loyalty for Shalldark. It’d be interesting if Black Splendor harbored a rebellious, autonomous personality of her own (which might explain her inability to kill her foes despite “brainwashing”). The main characters are equally explored as the “elite five” and everybody else — they’re not.

The titlescreen is nicely arranged. Nagisa’s visage is an attractive addition (though it’d be nice if it wasn’t copy/pasted from the in-game pause-menu). From “Options”, you may adjust audio and gameplay preferences. To toggle borderless-fullscreen, hit the “F4” key. To hide the user-interface (or dialogue box), just right-click the mouse button. The sprites are a mixed bag. It clear this game pulls from a roster of premade assets; there are a clash of stylistic choices. Though they are (lazily) explained by the story (“different floor designers” my ass), a lot of sprites simply don’t belong. Barring named characters, enemies are stock and lame (ties, really?) I wish there was more variety in baddies (the lack-of is probability a way to reduce “game-over” cut-scenes). I think there’s only four visually distinct “generic” enemies in the game (three if you count the “sentient” traps like slimes, tentacles, and bondage machines!)

Wow, what an adventure. . . but not a twenty-dollar adventure. Psychic Guardian Super Splendor is a very repetitive game. Level-ups are a necessary, slow grind that is made worse by the lack of enemy variety. Boss fights typically boiled down to “attack, heal, attack, heal and heal again” — despite going out of my way to level-up and explore optional areas, bosses still provided stupidly tedious battles that’d drag-out. Later in the game, it’s possible to spam high-power “psynergy” (or “PE”) attacks, but running out of PE mid-battle is a death sentence. Some bosses use “traps”, which (depending on how many you’ve triggered leading up to the fight) can result in you near-automatically losing. You need PE (lots of PE) to break free. Overall, combat just wasn’t very fun. Much of the game is exploration — each floor is teeming with loot, and you’re encouraged to revisit them as you gain access to new “keycards”. It’s quick and easy to uncover sexual content — but unfortunately, if you want to beat the game it’s best to avoid it. I managed to complete this game while deliberately viewing sex-scenes, but it was a frustrating experience. Psychic Guardian Super Splendor is tedious role-playing game, but it’s worth grabbing on a good sale. If you enjoy humiliation, BDSM, rape and orgasm-torture, you’ll love the sex-scenes! 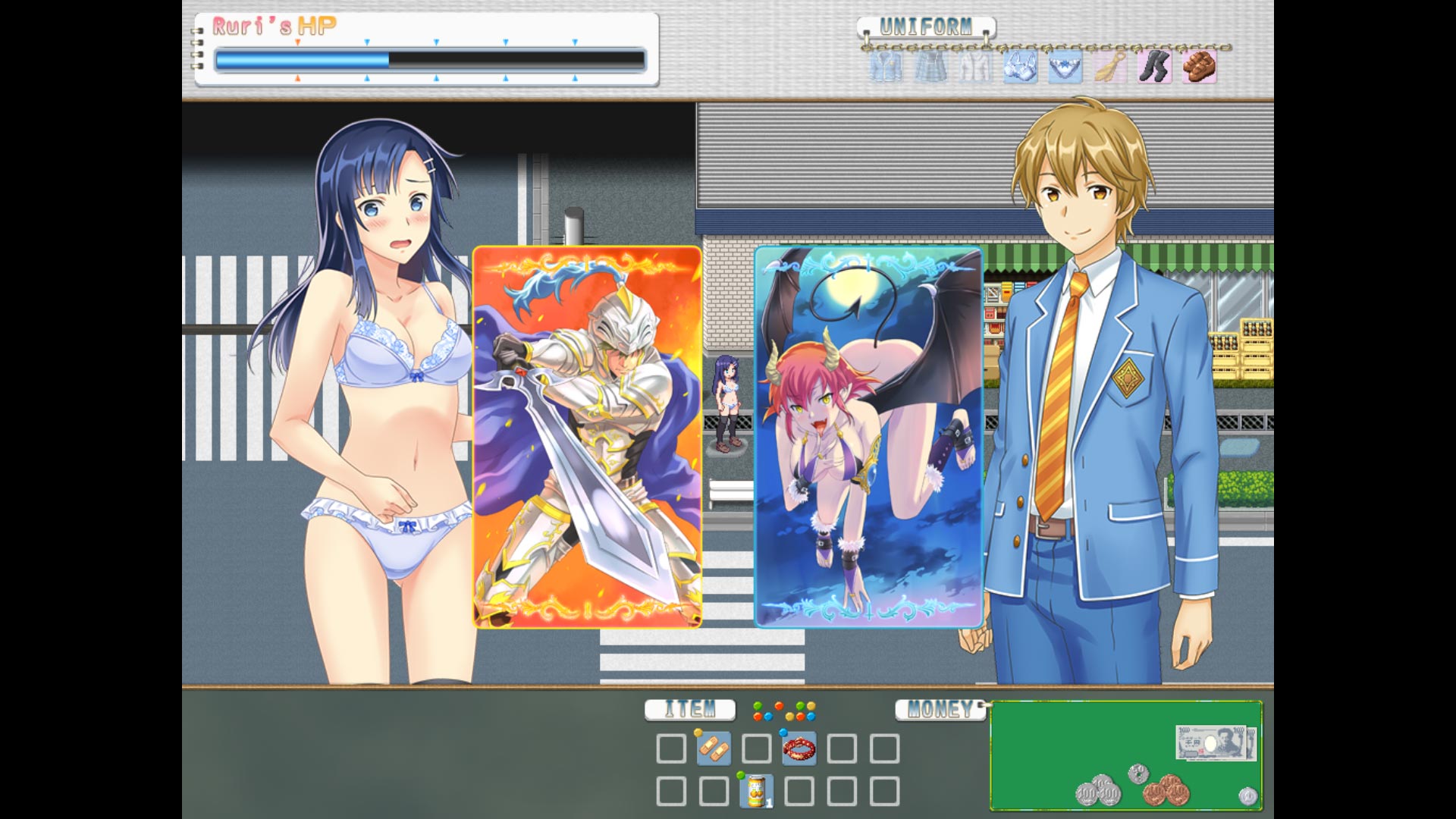 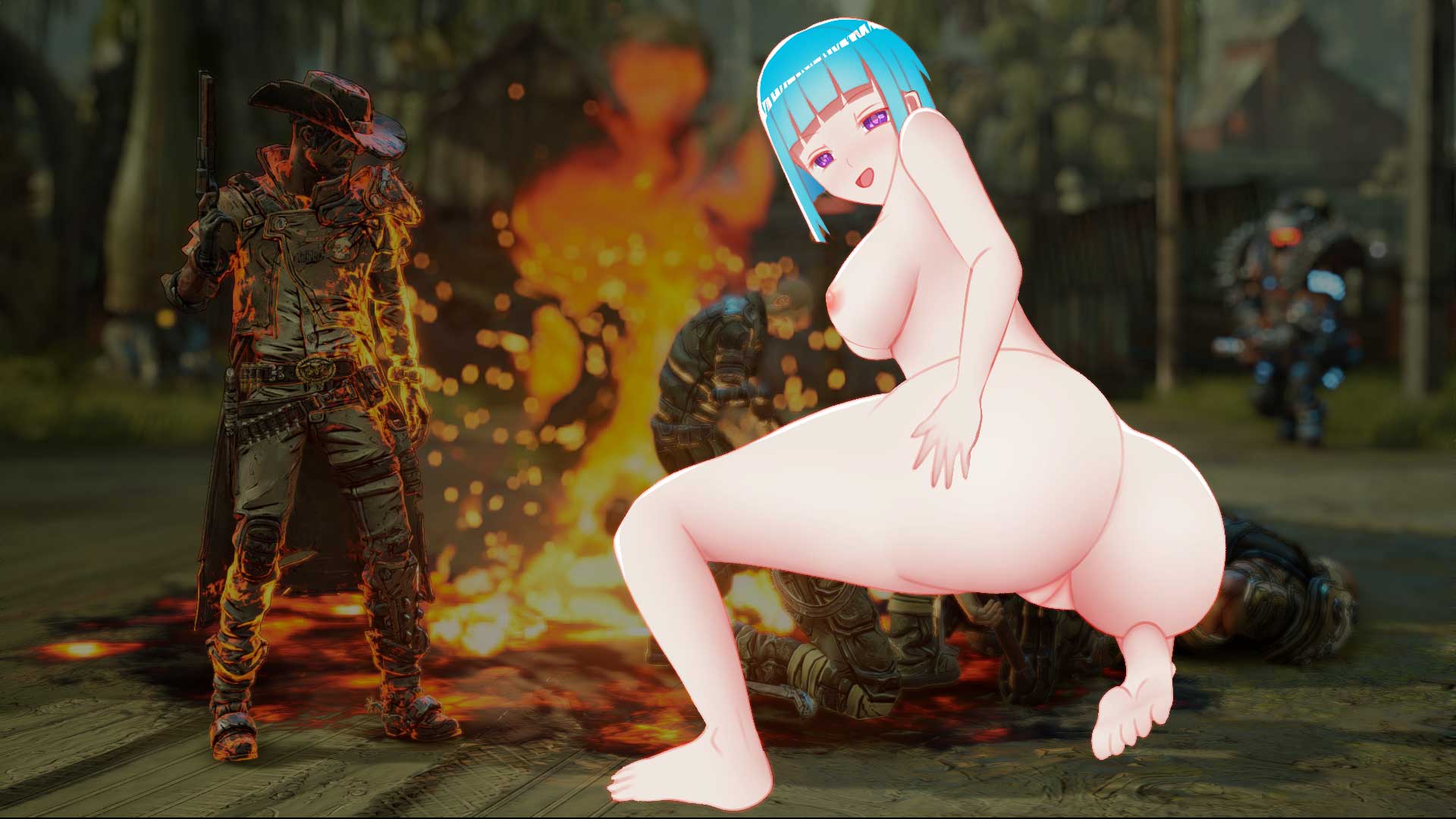 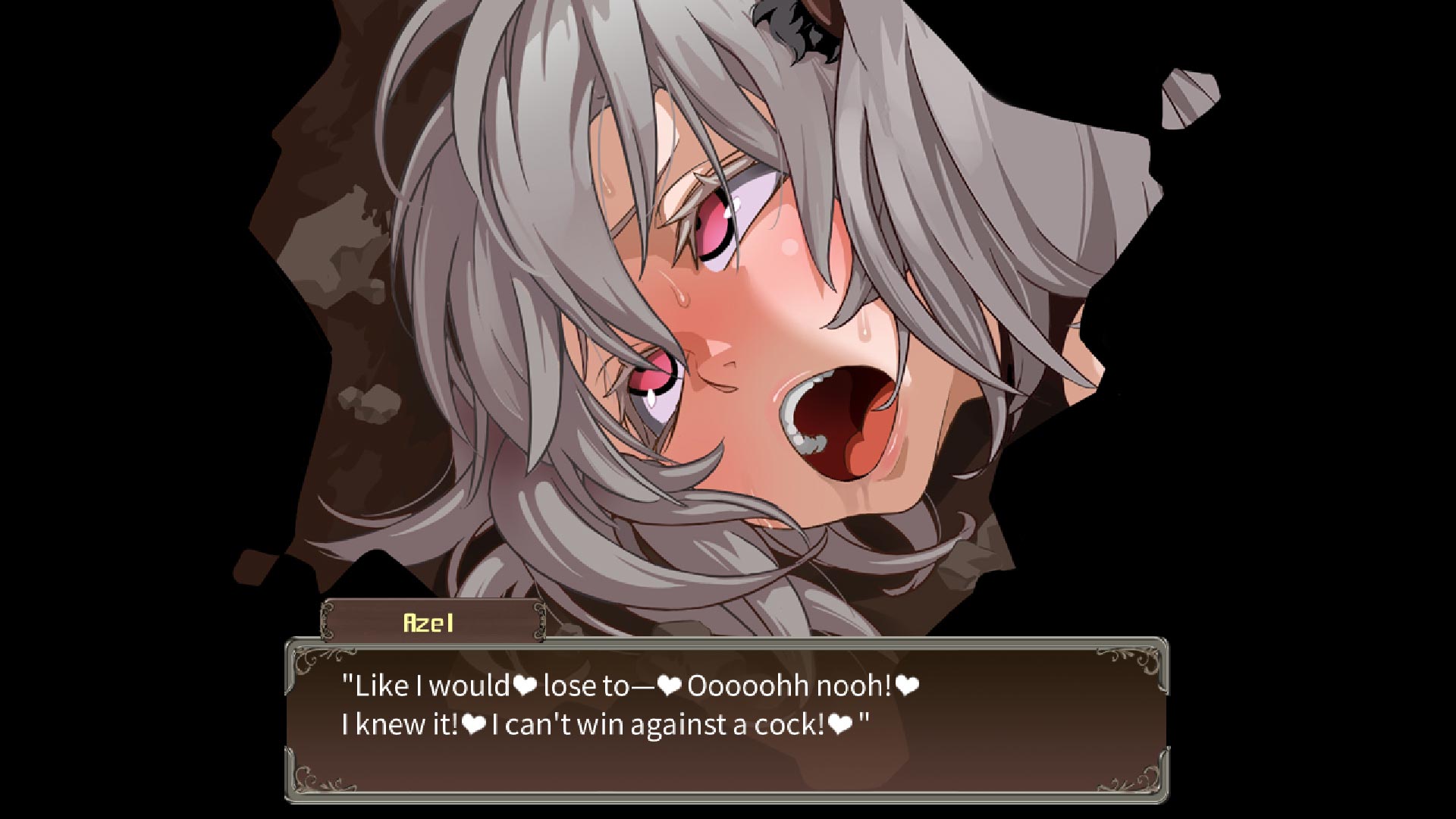 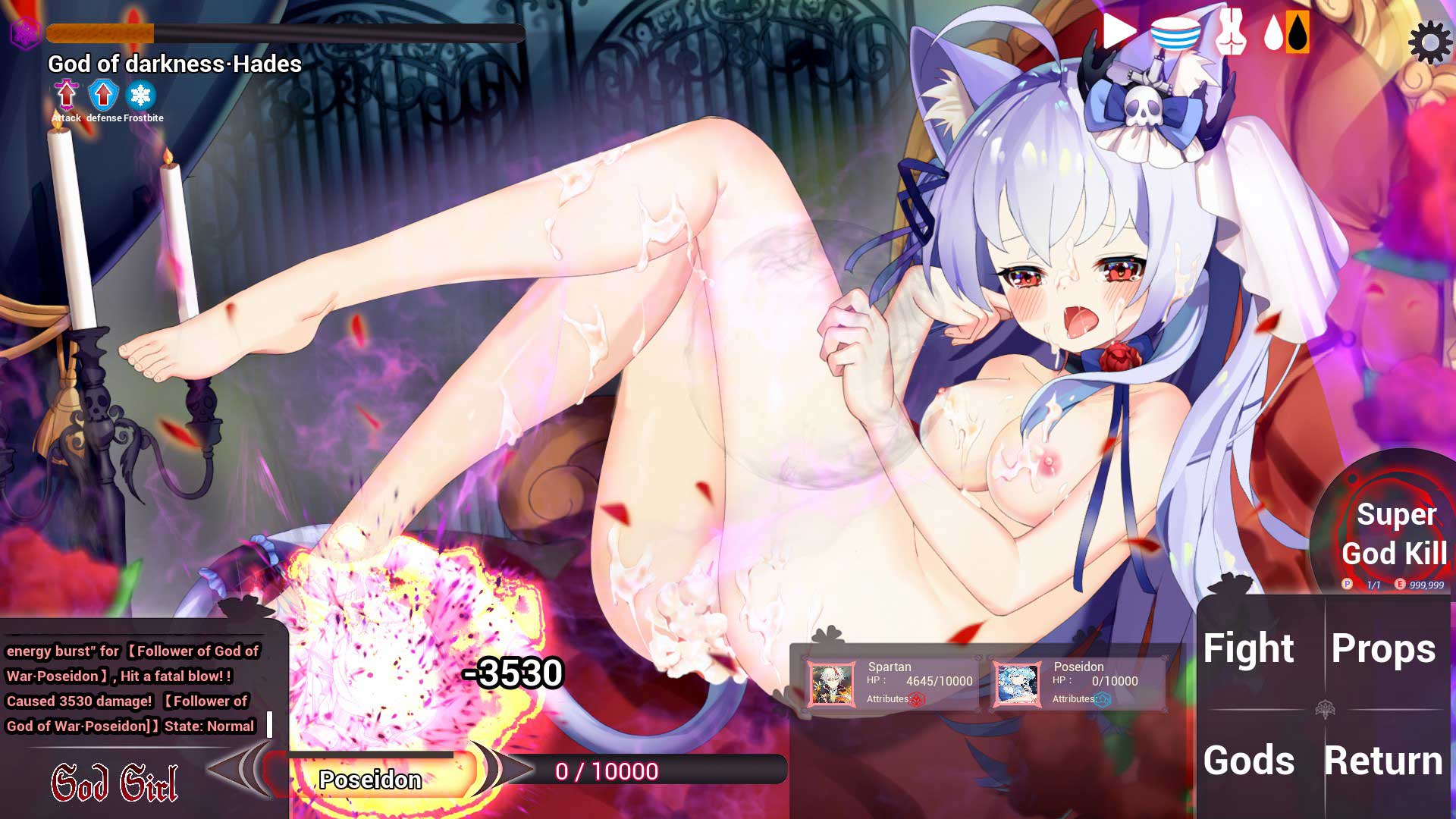